The collection, patiently collected by the Verona artist Alberto Bazzan, was acquired by the Cassa di Risparmio di Udine and Pordenone Foundation as part of the project to recover and enhance the artistic, historical and cultural heritage of Friuli; it was subsequently entrusted in loan to the Superintendency for the Assets A.A.A.A.S. of Friuli Venezia Giulia to be permanently displayed in the National Archaeological Museum of Cividale del Friuli.

It consists of 34 Longobard gold coins, some very rare and even not known to the official bibliography and is considered, both in number and importance, the third collection in the world of this kind. Monetization of Lombard gold The Lombards came to Italy knowing the currency, but lacking the conditions for a real monetary culture.
The currency, preferably the tremisse (one third of the golden solid), both the original Byzantine and that of imitation, is not a means for economic transactions but a symbol of status, jewel, amulet. As such, it is charged with symbolic values ​​in imitations, often upsetting the legends and modifying the types (there are 11 copies in the collection). In this first phase, in the first phase, it seems in the most complete disinterest of the occupying authorities, tremulous in the name of Justinian I and Justin II, rather than the Lombards, for the Lombards (see coin no. 1). Only with Agilulfo the king assumes the initiative and control of the coinage of the coin, accepting on the obverse the bust of the emperor Maurizio Tiberio (582-602) and on the reverse side the Victory with the globe crucigero (see coin n ° 2). A little later, even in southern Italy (Benevento?) They start similar coats, in the name, however, of Heraclius (610-641) with the cross on the reverse (see coin n ° 3).
For most of the seventh century, in the North and South, tremors were beaten in the name of the emperors who succeeded each other in Byzantium. In the second half of the century, however, there was an increasingly clear rejection of the emperor's name on money, which slowly evolved towards a "national" formulation. Initially in the North, in large-fledged coins and with a decreasing weight, the legend and type of the tremissi are resumed in the name of Maurizio Tiberio, while in the South there are globular types with completely distorted legend, both on the obverse and on the reverse. In the North, with Perctarit, there is then the first attempt to place the royal monogram on the silver coin, and the Marinus monetiere puts its name on the gold coins (see coin n ° 12). 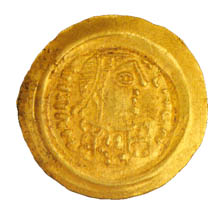 Tremisses n ° 12: on behalf of the Dukes (?) With the Marinus monetiere The process ends with the end of the 7th century: Cunincpert conia tremissi of the type with the Victory, with its own name, as "Rex", both on the obverse on the reverse. Subsequently he implements a courageous monetary reform. A completely new coin is proposed, of full weight and pure gold, with the portrait and the name of the king on the obverse, and the "national" type of St. Michael in military dress on the reverse in precise opposition to the contemporary Byzantine types (see coins No. 14 and No. 15). 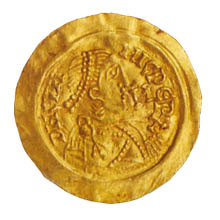 Tremisses No. 14: CunincpertThis typology still continues, in the North in the first half of the eighth century, but with products that become, however, more and more shabby, with weight and alloy in continuous deterioration. On the tremutations of Liutprando appear letters indicative of the ticks (in the collection there are 8 specimens - see coins from n ° 20 to n ° 27). 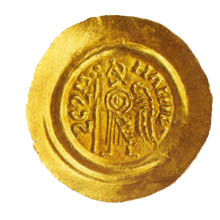 Tremisses n ° 20: LiutprandoSituazione, this, in which it should be read, perhaps Tremisse n ° 20: Liutprando the activation of a series of ticks in Tuscia that beat autonomous tremolises, with the cross in reverse (see coins n ° 5, n ° 6 and 7) and with new types of straight with the monogram of the city or with a star in a circle and legend, also circular, with the name of the city, indicated as flavia. This is the "starry" type (see coin n ° 32), 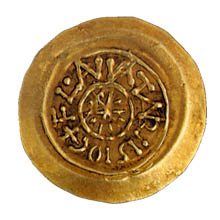 Tremisse n ° 32: Desiderioadottato finally by Desiderio for the entire kingdom, with the indication of Milan, Pavia, Castelseprio, Ivrea, Treviso, Vicenza, Pombia, Novate, Piacenza, Vercelli, Lucca and Pisa. It is, again, of tremissi produced with technique and Tremisse n ° 32: Desire style more and more neglected and with a progressive decrease in weight and in the league. To this period of evident economic crisis, the three low-gold trembles, mock counterfeits, belonging to the collection shown here (coins n ° 28, n ° 29 and n ° 30) unknown to the specialized literature are probably also ascribed. It is understandable then how Charlemagne, after the conquest of the kingdom (774), continued the coinage of "starred" gold, which ceased to be minted in 781 with the introduction of a single silver coin. In the collection shown here there is also a tremisse (see coin n ° 33) 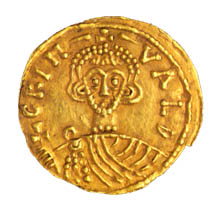 Tremisses No. 33: Grimoaldo III and Carlo Magnoed a solid of the Duchy of Benevento (see coin n ° 34), 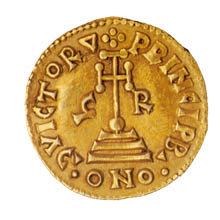 Solid n ° 34: Grimoaldo IIIterritorio which gravitated in the sphere of influence of Byzantine coinage. The tremisse is in the name of Grimoald III with Charlemagne (788-792) and the solid is in the name of the only Grimoald III (788-806) who, having freed himself from the protection of Charlemagne, in 792, proposed himself as prince. The coinage of the Duchy of Benevento makes history at Tremisse No. 33: Grimoaldo III and Charlemagne Solid No. 34: Grimoaldo III if, because it denounces the intermediate placement of the principality between the Carolingian and Byzantine world, between the area of circulation of gold and that of silver.